skip to main | skip to sidebar
SHINE is a look backward from the present to Salem's 1860 charter. In each year we have four sections: glimpses of what was happening around the world, a special event in Salem, what you see when you visit that site today, and other Salem events of interest that year.

1942 in Salem
For this year, we depart from our usual format to reprint the following Salem Public Library Salemhistory website article about life in Salem during World War II, researched and written by Sue Bell.

As 1942 began, National mobilization for war became the order of the day. Auto production ceased so the automotive industry could gear up to produce war materiel; rubber was rationed, tires disappeared from the civilian market; gas rationing went into effect; scrap metal was collected and turned over to the war effort; draft boards processed the scores of young men answering the call to protect their country; blackouts in all coastal cities continued, and the speed limit was reduced to 35-miles-per-hour; liquor production was curtailed till the end of the war.
Shortages of the following everyday items brought home the realities of a war-time economy: metal hair curlers, wigs, lawn mowers, girdles, sugar, quinine, gin, tea, rubber diaper covers, metal caskets, electric appliances, fly swatters, tin soldiers, electric trains, and bicycles. Scrap drives, war bonds, ration books, defense stamps, air raid wardens, articles in the newspapers offering advice on first aid after exposure to poison gas, blood drives, civil defense meetings, cautions such as "Loose lips sink ships"--all became commonplace as the Nation, and Salem, prepared for an all-out war.
Despite uniformly bad news from all the battlefronts: Wake Island taken in January; Singapore's fall in February; the Battle for the Philippines culminating in April with the fall of Bataan; that same month Burma fell (Hong Kong had fallen the previous December.) By June, Nazi U-boats had sunk 213 vessels in the Atlantic during the previous six months; in the Pacific, the Battles of the Coral Sea, and Midway and Guadalcanal in the Solomon Islands engaged thousands of sailors and Marines with thousands of ships, planes, and munitions against the enemy; North Africa was overrun by Erwin Rommel's Panzer divisions; and Stalingrad was fighting for its life--despite all these reverses, morale in the U.S. remained high with the spirit of "We Did It Before and We Can Do It Again." Another hit song of that era was "Praise The Lord and Pass The Ammunition."
Salem concerns were those of a Nation at war, with a few distinctly local matters. In February, President Roosevelt had issued Executive Order 9066 calling for the internment of all Japanese, "citizens or not," in one of ten resettlement camps further inland. That same month in Portland an espionage cell of some 30 Japanese was raided, leading to the Capital Journal's editorial of February 21st justifying the "Purging of Potential Spies." Marion County's 193 residents of Japanese descent were shipped on June 2, 1942, to a camp at Tulelake, California, about 35 miles south of Klamath Falls, Oregon.
In January of 1942, a project was begun that ultimately affected--economically and socially--Salem's wartime experience: the construction of Camp Adair in neighboring Polk County. By June, troops were arriving to begin training at the camp: "A city for 40,000 was built in six months." Some 8,000 civilians worked on the camp's 1,800 buildings and, after completion, more were employed to staff the five movie theaters, 13 post exchanges, two service clubs, the hospital, banks, post office, and phone exchange.
Every Friday night, groups of Salem girls took the bus to Adair to dance with the servicemen--who, in some cases, became their future husbands. The soldiers who preferred to come into Salem for recreation hung out at the U.S.O., 693 Chemeketa Street, or at favorite dance spots: the Crystal Garden Ballroom at the corner of Liberty and Ferry Streets, or the Salem Armory. Willamette University and the YMCA offered their facilities and services to Adair's soldiers. Salem homes were opened to servicemen each weekend and, despite shortages, those homes offered home-cooked meals and a taste of family to men far from home.
A huge iron and steel scrap drive on July 30th covered the west Courthouse lawn with every manner of container, toy, auto part, appliance, or household item imaginable, leading a trio of welders/sculptors to construct "Scrappo" from the ten tons of scrap metal, a symbol for the mighty efforts. Some 1,500 Salemites heard the metal sculpture "speak" (via Gardner Knapp, ventriloquist, and C.W. Paulus, who moved "Scrappo's" jaw!) And millions more throughout the Nation saw "Scrappo's" performance as the event was filmed by Universal Film Exchange, Inc., to be shown in theater newsreels across the country. Children who collected a pound of rubber that day were treated to a special free performance at the Elsinore Theater.
The war came too close for comfort in June and September of this year when Seaside was shelled from enemy ships and a Japanese plane, launched from a submarine offshore, flew low over Curry County and dropped a thermite bomb. It caused little damage in the forested area--burning only .01 of an acre --as it had been dropped from too low an altitude, but the incident proved not only the audacity of the enemy, but also that Oregonians were closer to the war zone than they had thought!
In July of 1942, Willamette's V-2 College Training Program, in cooperation with the Navy and Marine Corps, was established to meet "the military's need for a steady supply of college educated officers." Lausanne Hall, the all-female dorm, was re-designated the "U.S.S. Lausanne" and furnished housing for the trainees.
Late in the year, disaster struck the State Hospital when 47 patients died of poisoning: the assistant cook had inadvertently mixed roach powder instead of powdered milk into the scrambled eggs served that morning in November. Initially thought to be the work of a saboteur or spoilage of the eggs, the truth be-came known the following day: a tragic accident.
Posted by Virginia Green at 9:57 PM 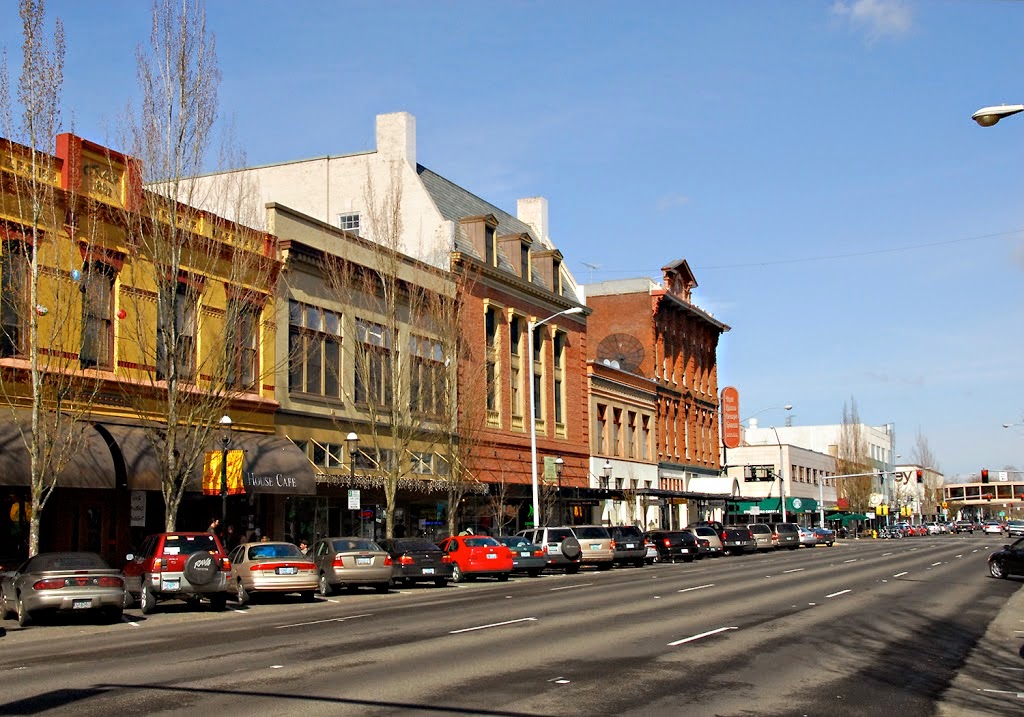 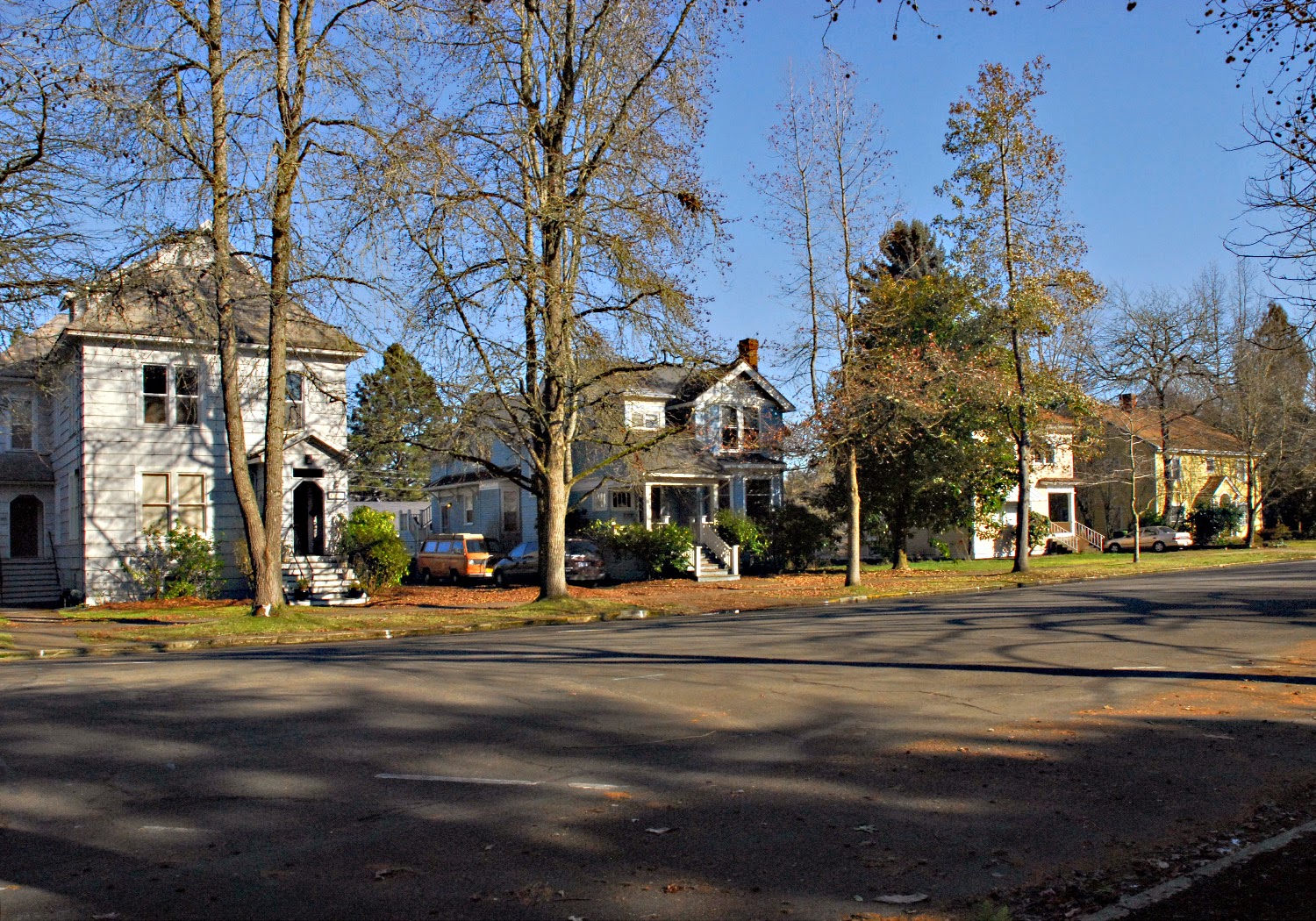 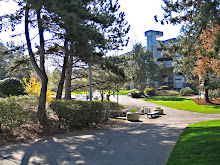 Text is compiled and edited by
Virginia Green.
Text resources are identified by links to the Salem History Project (http://www.salemhistory.net), Discover (http://discover-neighborhood-history.blogspot.com), City of Salem, Statesman Journal (1995-2009) and other websites.

Contemporary color photographs are by
Thomas N. Green, Jr.
Unless otherwise noted, all historic photographs are from the Oregon Historic Photograph Collections of the Salem Public Library:
http://photos.salemhistory.net